Arizona is unique. Why? Because we receive rain from two places: the California area & the Mexico area. The Grand Canyon state is host to practically every type of topography. We have the desert in the lower region and the pine forests in the northern. Our climate can suit almost any person, whether you like the dry heat, or the moderate, cool temperature in the upper region.

What makes this state even more interesting is that every summer in Arizona we have a monsoon season, which can be described as hurricane and tornado-like winds, down-pouring rain and magnificent lightening shows. This part of the summer also witnesses the mighty force known as the haboob, which can only be seen in Egypt & Iraq. It is a wall of dust that carries itself over cities and neighborhoods, forcing drivers to pull off to the side of the road because they can no longer see in front of them.

During the monsoon season, the clouds build up all day long and sheets of rain let loose in the late afternoon and evenings. Frequently two storms build up from the southern region and the northern region, bursting inside the Valley. At other times, the monsoon combines with the dust storms to create a massive storm of epic proportions. The aftermath of a monsoon reveals knocked down power lines, metal street signs twisted in ways not thought elementally possible and trees bending into the streets after being uprooted. Roads are overwhelmingly flooded, making sidewalks invisible and cars shooting up walls of water. The canals, which are usually empty all year, are finally flowing like a river. Kids are swimming in lakes of water that once were grass areas. Some even bring out kayaks and paddle across the grassy lakes.

No matter the inconveniences that also arise after a monsoon has passed, such as blackouts and humidity, it brings with it excitement and relief for many Arizonans. We get to see the preview of it all day outside our windows as the clouds become larger and the sky grows darker. Cooler air offers a welcome comfort after experiencing scorching days over 100 degrees Fahrenheit. Monsoons become memorable events because it reminds us that life is still supported in a state that continually faces droughts and gives us something to look forward to in the Spring: blooming cactus blossoms & fields of flowers. 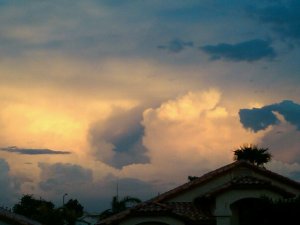 The first of a wave of monsoons this season.

The brewing storm in Downtown Phoenix.

Trees have been blown over by the monsoon winds.

This family is loading up their kayaks after taking a cruise in the grassy lake. 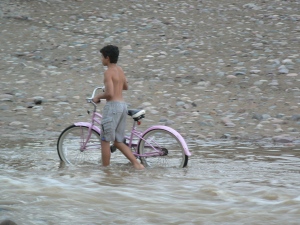 A kid takes a break from riding his bicycle through the grassy lake.

A video of a grassy area transformed into a lake after a heavy monsoon rain.